The ROI of Manager Training

We’ve all heard the expression of someone being “promoted to the level of his incompetence.” It’s a truism that lots of 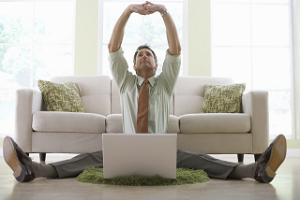 Since Todd became a manager he’s found it much easier to deal with employees if he just stays home.

employees find very frustrating. But most companies have no idea how very, very expensive it can be to promote someone over other people without giving him the training to become competent. The fact is, managing people requires a whole host of skills that other jobs don’t require and the cost of doing it badly can rise to the hundreds of thousands.

Last year, the Equal Employment Opportunity Commission awarded a record number of huge verdicts—around $200,000 in many cases—to employees who had been fired for disabilities, suffered sexual harassment, suffered racial discrimination, slurs and threats and other violations. And in each case, the managers knew about the violations. Or they were the perpetrators. But either they had no idea the risk they were taking, or they had no idea how to handle the problems that were happening on their watch.

We have a lot of clients who have a great employee, they want to promote him, but they don’t want to spend money to train him. “He’s great with people” they say. “He’ll be fine.” That may be. But it doesn’t mean he knows the rules about how to treat sexual or racial harassment or deal with employees with disabilities. It doesn’t mean he knows what to do when two employees are in a conflict that’s costing the company productivity or when someone just starts showing up late all the time. Managing people is a career unto itself. Failing to train a great employee how to manage people before you promote him is setting both him, and his employees, up for failure. He could wind up leaving, not wanting to stay in a company where he has been publicly humiliated. So then you’ve lost a great employee and created an anxious situation for the people who worked for him.

Plus, he could unwittingly do a lot of damage in the meantime, trying to resolve issues based on instinct alone. It’s just not fair to anyone.

Oh, and while we’re on the subject of cost, replacing an employee can cost between 20 percent and 150 percent of annual salary.
One of our clients recently promoted a woman from team member to manager. We were happy and relieved that they asked us for help with training her. We got to help her figure out how to change her relationship with her former teammates in a constructive way. We’re teaching her about the laws and coaching her through some of the issues she’s facing. We think she’s going to be a great, and successful manager.

And if she is, that’s going to result in better productivity, happier, more engaged employees and an overall successful company that isn’t part of an EEOC suit. The ROI of manager training, ultimately, is well worth whatever it costs.