There’s a lot of news lately about discrimination and harassment, which 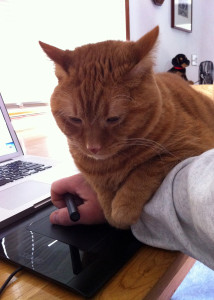 is discouraging. A couple of weeks ago I posted about the story of the former city employee who used a derogatory map as a joke during a presentation. And coming up, SXSW is doing an entire day of sessions about online harassment after a couple of sessions on the topic inspired Gamergaters to threaten to hurt or kill people at the conference if they even talked about discrimination and harassment. With stuff like that, it’s clear to see the line between appropriate and inappropriate. Everyone can see what’s happening. But whenever I do presentations about harassment and discrimination, one form surprises people. It isn’t jokes or offensive pictures, slurs or innuendo or threats. This form of subtle harassment is called: Interfering with Work Performance.

Say you’re working in a restaurant, and you hide the chef’s knives as a “joke.” Or….

Those are a few of the ways you can interfere with someone’s job. And yes, they can legally, ethically and fundamentally translate to harassment.

Most people by now know the obvious forms of harassment and discrimination. They know they’ll very likely lose their jobs if they’re caught in the act of any of those. But some people take a passive-aggressive approach to hurting people they don’t like—whether they dislike them because of race, religion, gender or personality. And they figure they can get away those things because they’re under the radar—they’ve never seen it on a list of discriminatory or harassing behaviors.

Maybe they just haven’t looked at a list lately. When your organization has training, those “underground” behaviors are illuminated…for everyone.

Let’s say one employee is making life miserable for another employee. The team has had no harassment or discrimination training for a long time and the manager can’t take action because they can’t figure out how the behavior is violating the rules. Finally, the employee can’t take it and learns from a friend or from Google, that this behavior is actionable. Both the harasser and the manager are now liable—as is the company. And if the information gets on a social media site, well…you’ve heard of Denny’s right?

Of course, nobody wants legal action. And nobody wants a reputation in the marketplace as a haven for harassment and discrimination. But that’s obviously not the only reason to get training so that you know how to address its more subtle forms. In fact, a manager’s first question shouldn’t be: “Are my employees doing this to each other? Am I doing this to anyone?” The first questions should be: “How are employees working together? Do they help each other get stuff done? Do they seem happy?” Find what’s right first. If any behavior or employee relationship fails the positivity test, then start looking for answers.

In this age of trigger warnings and the like it’s tempting to either go overboard with political correctness or go the opposite direction and just say whatever comes to mind. Neither works. Leaders can’t ignore the behavior, nor should they go on a witch hunt against any behavior that isn’t sweetness and light. (And who wants to work at that sugar factory anyway?) The point is to give employees the tools to identify and take action on behavior that’s actually ruining the work environment and hindering their ability to perform at their best. Most of your employees are there to grow personally and to help the organization grow and succeed. Your job is to give them all they need to accomplish that.