If the idea of emotional intelligence sounds like a bunch of hooey to you—as it does to some people I’ve met—consider this:  An 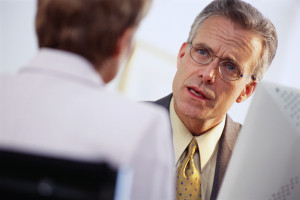 Okay, so what you’re saying is you feel…sad… about being fired. Do I have that right?

emotionally intelligent person knows enough about how activity, sleep and circumstances effect him that he can choose to leave important decisions for times he’s feeling most centered and clear headed.  He can recognize when he’s feeling frustrated and let someone else lead the meeting until he calms down. He can empathize with how an employee might be feeling and phrase things in a way that will help the employee meet their shared objectives rather than create new emotional roadblocks.

The truth is, whether you want to admit it or not, emotions happen.  Emotions play a huge part in how we communicate. Most of us use emotions to communicate that a deadline is urgent, for example, or a client is threatening to leave, or an employee has become a problem. We may use positive emotions to express that someone has done really well, or the team has reached a milestone. Few of us are Dr. Spock, communicating without emotions. And knowing how to recognize, regulate and respond constructively to those emotions plays a huge part in business.

Managing your emotions isn’t the same as controlling your emotions. Some people grow up with the idea that any expression of emotion is bad and people should reveal as little as possible about their emotions. For others, registering some emotional behavior—like yelling in anger—is appropriate to the workplace. But if a woman cries, that’s considered unprofessional for many.

A lot of factors play into whether and how people express emotions. Perhaps blatant anger wasn’t considered acceptable in the home you grew up in, but crying was. Or vice versa.  People respond differently to situations like dropping the ball with a client. Some people might feel shame, others fear, others frustration or anger.  An emotionally intelligent person recognizes that his or her own feelings about the situation are personal and must be managed internally. But a person who is uncomfortable with emotions may not be able to handle how bad the emotions feel. That person may cast around for a scapegoat so he doesn’t have to experience that discomfort. His looking to cast blame may trigger anger or defensiveness in other employees, next thing you know there’s an office blowup, meltdown or feud. Drama!  Which just saps the productivity and focus of everyone.

Admit it, most of us are at least a bit more emotional when we’re tired, hungry, dealing with lots of different stressors in the workplace or at home. Someone going through a divorce, with a sick child, or having chronic pain, for example, already has a lot to cope with, so adding more stressors on top of that may trigger an emotional response that wouldn’t occur normally.

The bottom line for managers is you can’t afford NOT to understand all of this. If you want to succeed with employees, you have to have a good grasp of the role emotions play in communication, in office dynamics, and in making choices. Choosing to ignore emotions as a factor is sort of like choosing to ignore how certain actions affect the bottom line. You can do it for a little while. But sooner or later, you’ll wind up paying for it.

Some people are naturals at it. But if you’re not, how do you start? There are a million resources on emotional intelligence. But the most insightful first step is just to begin to understand your own emotional landscape. How do various circumstances affect you and how do you respond? Is the triggered behavior helpful or hurtful in solving the problem? Is there a different way to respond that might have a better outcome?

Emotions happen. It’s always a good time to work on your EQ.

One Response to “Running a Business? Check Your Emotional Intelligence”