Leadership is About Who You Are as a Person 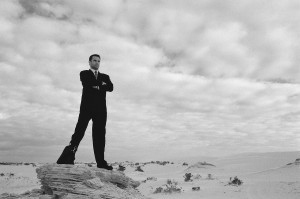 This dude is not interested in finding out what kind of leader he really is. Bet his team would love to tell him.

to be great at it. They want the vision of Steve Jobs, the efficiency of Jeff Bezos, the moxie and mentorship skills of Barbara Corcoran. But leadership is hard. And the most difficult thing about it is that what matters most to your ability to lead isn’t what books you’ve read or what techniques you’ve adopted. Leadership is about who you are as a person.

If you are impatient with mistakes, that will show up in your leadership style. If you’re arrogant, afraid, insecure, short tempered…it will all manifest itself when the pressure’s on, no matter how much you try to mask it. What that means is that, in order to be a good leader, the first step is know thyself. You have to look with bald honesty at what kind of person you are, how you think and function under all kinds of circumstances. And then you begin working on the things you want to be different from there.

I give leadership training sessions to people in many different industries. I have people in the class assess the best and worst leaders they’ve ever worked with and identify the characteristics that describe those leaders. Then I give them a personal assessment. No one sees it but them, so they can fill out the answers with complete candor. It asks them to rate on a scale of one to ten their thoughts on statements about which they value more: people or performance or both.

To be honest, some of the questions don’t sound good. Answering some of them in the affirmative makes you sound like you’re a heartless tyrant and others make you sound like you’re a spineless people pleaser. But here’s the thing: If that’s true of you, your employees can see it every day. But can you? You’re the only one who has the power to do anything about it. That’s why it’s so important to answer truthfully.

The Blake Mouton assessment identifies most people in one of five categories:

• The Authoritarian Leader has little interest in fostering relationships. This kind of leader is all about results and they’re pretty sure they’re the only one equipped to make sure everyone is contributing to those results.

• The Country Club Leader is alllll about relationships. They don’t want anyone to be mad at them. They’d rather everyone be happy than push anyone beyond where they’re comfortable.

• The Impoverished Leader knows that they weren’t ready to take on this role in the first place or they are just checked out in general. Their main objective is keeping their job.

• The Political Leader is similar to the Impoverished Leader except cagier. They’re better at working the situation around so they’re always doing okay, but they’re never pushing the organization forward.

• The Team Leader is the most effective one for building collaboration and performance, so that’s the one we want to be. Team leaders don’t see any conflict between people and performance because they see it as their job to help their people become their best selves by performing on the job. They’re not afraid of conflict but they don’t go looking for it either.

We all, as I said, want to be this leader. We can all work toward it. But most of us are going to fail sometimes. When something goes wrong at my company, I tend to become the Authoritarian Leader. “There was a mistake!!!?? Fix it! Now!”

I’m not proud of it, but that’s what has happened. So…
Knowing that about myself has let me work on it over the years. When something comes up and I can feel my blood pressure rising, I’ve had lots of practice at handling it differently. Handling it a way that lets my associates fix their own mistakes and supporting them while they take responsibility for their work or themselves. Then we all learn from the situation.

That’s so much better for everybody.

This year I’m going to do at least one post a month on how to be a great leader. Getting a chance to lead other people is a huge privilege and a huge responsibility. It’s an enormous opportunity to grow as a human being, as well as in your career. And once you get the hang of it, it can be really fun. Wonder how I can become as respected as Barbara?