It’s time for the annual holiday party and management folks everywhere are trying to figure out how to make this a fun, 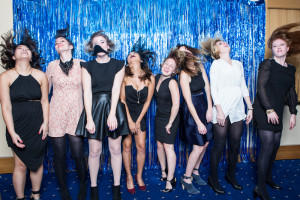 festive celebration without any catastrophes. Or let me say, some of them are. I’ve known CEOs who grabbed the DJ’s microphone and announced “Hey I paid a lot of money for this party so drink up!” This CEO was clearly not thinking about the whole drunk driving dilemma or the prospect of people passing out in the corners. I knew a CFO, though, who announced, a day before the party, that employees would be getting only two drink tickets. Haunted by the specter of the CTO passing out the year before, he tried to clamp down on excessive drinking. The result was that some people who weren’t planning to drink anyway handed over their tickets to people who wanted to drink until they were tanked.

In other words, as I’ve said before, you really can’t treat everyone who works for you like a bunch of irresponsible, underage partiers because some people might overdo it. Neither can you ignore the fact that if someone gets drunk at your company party and drives home and gets in an accident or hurts someone, you’re liable. So what do you do?

The answer, for this and a whole host of other questions, is you build a culture of respect and open communication in your company. You structure the interactions around your company such that if someone is demonstrating that they have a problem—like they’re three sheets to the wind—it’s expected that someone will say something and take action. I once heard some people in a company gossiping about how drunk a woman got at a happy hour at a trade show they went to. No one said anything to her about it or tried to stop it or help. They just talked about her behind her back afterward. The woman in question was in charge of their presence at the trade show and it’s my guess she’d been too busy all day to eat. There was no food at the happy hour and, so, voila: drunk trade show planner. In a culture of trust and respect, the fellow employees would have felt comfortable checking in with her at the event in a kind and professional manner.

1. Have plenty of protein and fat-based food at the event which helps to absorb the alcohol. Consider spending the budget on a fantastic spread of food and have a cash bar instead of free drinks. This doesn’t mean no one will overdo it, but it reduces the chances. People are tempted to overdo it when things are free. Free food, free drink, free schwag, we just seem to grab for things when they’re free, even if we don’t want them.

2. Arrange for rides home for people who need them. There are a host of services for this in Austin as well as other cities. There’s Sober Monkeys, Tipsy Taxi, the Spare Driver…among others. Many of these will drive people home in their own cars.

3. Engage with programs like TXDOT’s Plan While You Can program. The Texas agency points out that “during the 2014-2015 Christmas Holiday Season (Dec. 1, 2014 to Jan. 1, 2015), there were 2,411 alcohol-related traffic crashes in Texas, resulting in 190 serious injuries and 110 fatalities.” TXDOT is trying to get people to plan ahead for a sober ride home and has incorporated a kind of virtual dodge ball game where players dodge snowballs. As drinks are added to each player, their ability to dodge the snowballs is impaired, showing the effects of alcohol on reaction time.

But the most important, most festive, and most effective way to celebrate without catastrophe is to have good communication within your organization so that employees expect that if they start to look tipsy or at risk, someone is going to step in out of concern and make sure they’re ok. Because that’s how your company works. And if that’s true, you’ll all enjoy the party a lot more, anyway.