Internship Programs Doomed? Only the Bad Ones 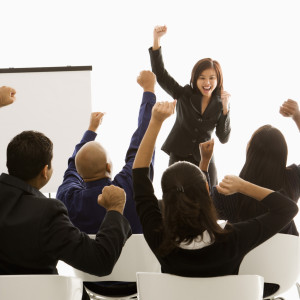 Which of you interns wants to pick up the CEO’s pastrami sandwich today?

menial tasks that didn’t help their careers and could have been done by employees. The article

wondered: Is this the end of internships? No! For Pete’s Sake! It may well be the end of the kind of internships that some celebrity-type operations offer. Conde Nast got sued, yes. And Charlie Rose and Fox Searchlight Pictures both got sued by interns. Why? Because they continued to trade on the idea that everybody wants to work for a major magazine or television show or movie studio. The continued hoping that people want to work there badly enough to spend a summer making coffee and shuffling papers in order to maybe rub elbows with the right people and be discovered.

But that’s not really what internships are about.

Internships are supposed to be the modern equivalent of apprenticeships. Whether paid or unpaid, they give students aspiring to a profession the opportunity to get real-world experience in a particular field. And there are a lot of benefits to that. For one, students get to see if they actually like the career field they’ve chosen and whether they have an aptitude for it. For another, they get an opportunity to perform at a job where they might wind up with a recommendation that makes their resumes more impressive. Heck, they might even wind up with a job at the place where they’re interning.

Internships are good for employers, too. Yes, employers have to put time and energy into training people who may not be equipped to tackle the job. But heck, they still get employees for a fraction of the price they’d normally pay. Plus, they get a firsthand look at people who might prove to be great employees in the future.

Another benefit for employers is the opportunity to teach employees the skills of mentorship. Leadership and mentorship are crucial skills for anyone who hopes to be a manager in the future. Having people on your team take on the role of teachers and mentors for student interns lets them develop and hone skills that may make them more eligible for a manager role when one comes open.

I know of professional firms, such as architectural firms and engineering firms that have had wonderful success giving projects to interns. Fresh out of school, the interns who were given the space to do so could innovate beyond what someone entrenched in the profession might have been able to do. Other companies have had MBA graduate students perform the kinds of organizational analyses that the company otherwise would have had to contract out to a consultant.

If you’re thinking of internship programs as indentured servitude, yeah, your days are numbered. There are myriad laws against hiring interns to do menial tasks that won’t advance their education. But if you’re responsible about handling your internship programs, universities will love you and send you students who may end up being your top performers one day.

Sorry Conde Nast, The Devil Wears Prada should have tipped you off.