Hiring? Make Sure You Assess the Soft Skills Too.

The client called me frantic. He had hired an executive assistant three weeks before and now he was 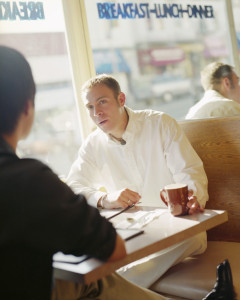 Norman Blows Another Job Interview: “What do you mean ‘Let’s say a client is upset…?’ Do you upset clients? Do I have to deal with conflict because I really hate conflict…..”

on a deadline with a project and it turned out his executive assistant didn’t know how to use PowerPoint. “Did you ask the employee whether he knew PowerPoint when you hired him?” I asked. “Yes,” my client said. “He told me he did.” Yeaaahh, I thought. That’s what happens. I remember taking a job where someone asked if I knew Excel. I thought I did. I mean, with the basic kinds of spreadsheets I’d made before, I could do it easily. But Excel had worlds of functionality I had no clue even existed and I found it out at the last moment, on deadline, when everyone was counting on me. That’s the beauty of actually assessing someone’s skills rather than just accepting their word that they have them. But while it’s relatively easy to test for hard skills—like knowledge of standard accounting practices or writing code—there are soft skills you need to assess as well. Don’t just ask. For example:

Problem-Solving Skills: Every employee needs to be trained and needs a little coaching from time to time, but no employer wants to hire someone who throws his hands up and says “What do I do now?” whenever a problem arises. You can test a person’s problem-solving skills by asking questions about problems that arose and how the employee solved them. Likewise, you could pose a probable situation that might come up and ask the employee how he or she would solve it.

Critical-Thinking Skills: These are similar to problem-solving skills, but not identical. Critical-thinking skills include evaluating, conceptualizing, analyzing and synthesizing information. Critical thinking might include planning and evaluating the ROI a given project will provide for a client, or prioritizing tasks. Someone with critical-thinking skills can scan for contingencies and plan the best route. For example, she might test out a new marketing campaign on a segment of the audience with a small portion of the budget rather than blowing the whole budget on an experimental campaign, no matter how cool she thought it was.

Interpersonal Skills: I don’t care how much of a rock star someone is in his or her chosen field—if their team mates can’t stand them, they alienate customers or vendors or they make you suddenly start thinking homicidal thoughts—you don’t want them. There are so many varieties of lacking interpersonal skills. Narcissism is one. If you feel like the person is showing disdain for, or unnecessarily criticizing others, that person may have a narcissistic streak. Hostility is clearly another. Arrogance, rudeness, making inappropriate jokes….. Basically use the airplane test. If you wouldn’t want to be sitting next to this person on an airplane for a long flight, you don’t want to work with him or her.

Work Habits: Okay, this isn’t a skill, but it’s one of those “soft” things that may not seem important, but is. For example, if this person tells you she likes to show up at seven and knock out work and then do meetings and team projects in the afternoon, that may be great. Unless everybody else rolls in around nine and wants to work on group projects, then do solo work time in the afternoons. That’s a potential mismatch and may make somebody unhappy eventually, especially in a small office environment.

Just using the word “soft skills” makes them sound unimportant. But the fact is, we’re humans, working with other humans to produce goods and services to serve humans. If we can’t do the specifically human part of the job in conjunction with others, we’re not going to be great employees—or bosses for that matter. So “soft skills” may be soft, but they’re as important, if not more so, than the hard skills we value so much. And if you need help coming up with assessments for them, give us a call.