Electronic Cigarettes an Issue in the Workplace. Or Are They?

So who could have seen this coming? More than 20 years after they banned smoking in most workplaces, the whole question has come up again in the form of 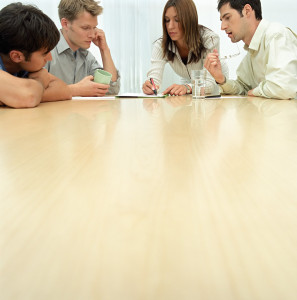 Redesigning the cubicles so that no one is downwind of Steve.

electronic cigarettes or e-cigarettes. These cigarettes have a battery that dispenses a vapor—with or without nicotine—that may smell like lots of different things. Vanilla, for example. Or peppermint. Because they’re not really cigarettes, employees argue that they don’t give off harmful second-hand smoke and that letting smokers smoke at their desks saves a lot of productive time that the employee might have otherwise taken to grab a smoke break outside.

Okay. Maybe. After all, people who take smoke breaks do create some havoc in the workplace among non-smokers who want to know why they get breaks the non-smokers don’t get. This causes employers to have to either curb smokers’ breaks or increase everyone else’s.  But that’s a different issue. The issue here is that E-cigarettes still have an odor. And odor in the workplace is a constant issue. Maybe it’s the guy who appears to bathe in cologne before coming to work. Maybe it’s the guy who has stinky smoked salmon sushi right next to the queasy pregnant employee. Or the employee who doesn’t believe in bathing regularly because it removes her body’s essential oils.

Really, employers don’t have to see this as an issue of whether people should or shouldn’t be allowed to smoke at work. Maybe this could be a blanket policy regarding respect for other people’s space, including their olfactory space. As an employer, for example, you probably wouldn’t let someone burn incense at his desk all day, even if you personally like the smell. You would deal with it if an employee left rotting food in his cubicle that made his area smell like a garbage bin. And if other employees were complaining about someone’s body odor or breath, you’d probably have to take that employee aside and have a little talk.

Of course, no workplace is without some odors. You probably have some kind of deodorant system in your office bathroom that employees do or do not like. You may office right next to a barbecue joint that’s pumping out the smell all day, which may bother a conscientious vegan. But there are some levels of odor that fall within the acceptable range. And those kinds of smells aren’t one employee offending those around him.

Then there’s the potential health risk. The jury is still out about whether there’s any harm to others from vapor cigarettes. But all that gets into a gray area. The safest bet, if you’d really rather not mess with the e-cigarette issue is just to make a policy that if employees have a persistent smell that bothers their neighbors, they need to deal with it.

And if you want help negotiating these kinds of tricky areas with employees, call us.

We work with companies on a project basis or on retainer, providing a custom level of HR help designed for your business. Contact me atCaroline@valentinehr.com or call (512) 420-8267.