The other night I tuned in to the movie Divergent and was frankly distracted, the entire time, by how much the plot 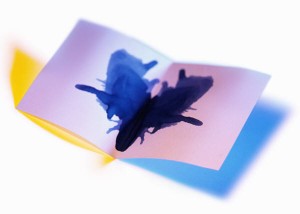 The candidate saw WHAT?

reminded me of how a lot of people hire these days. In Divergent, kids are given a test at 16 which pretty much tells them which post-apocalyptic faction they should join. They don’t have to do what the test says, but if they don’t and they change their minds later, it’s bad news. In the real world, we humans love these diagnostic tests to tell us everything from what career we should choose to what kind of mate we should seek. But when it comes to leaning hard on personality tests for hiring decisions, please think twice.

First of all, there a gillion of them. Myers Briggs, OCEAN, DISC, Birkman, Strengthfinders…they’re always coming out with new ones. Secondly, while they can tell you some things about a person’s personality, that doesn’t mean they are the ONLY barometer for the decision about whether to hire someone or not. For example, I once worked with a startup tech company that was looking for a sales person. One candidate who had taken their personality test looked really promising except that their personality test revealed they were an introvert. Well, the hiring manager said, clearly they couldn’t hire an introvert to do sales.

Except that that’s a terrible justification. Steve Jobs was an introvert and one of the most effective tech marketers in history. A lot of people who make their living as presenters tested out as introverts and have overcome that natural tendency because there’s some other aspect of their personality that gets fed by doing that kind of work.

Companies may also decide that a specific personality type is perfect for a particular role in the company without ever really looking at “Who are we as a company?” Would that personality type work with the way we actually interact with each other and with customers? Is that some ideal cooked up by a management guru, or is it the kind of person who can handle our unique business model?

Hiring is hard, but that doesn’t mean it’s okay to leave the task up to a diagnostic personality test.

A lot of managers lean on these tests because they think it makes the decision easier. But it’s only easier in the sense that they abdicated their responsibility to assess whether this person had what it takes to do the job. That requires looking at a lot of different factors, including previous experience, recommendations, carefully chosen and administered assessment tests that show you whether the person can handle the job, and your own gut. If you just get a weird feeling from someone, it could be that the person reminds you of your passive-aggressive mother, or it could be that the person is just…off. You should pay attention to that, too. Personality tests can tell you some things. Not everything. Believe me, if Walmart and Macy’s could administer a test that told them if an employee would steal from them, they would be requiring everyone to take it.

One problem I often see is that managers are afraid of making those decisions. They can’t see into the future. They don’t actually KNOW what will happen with this employee. What if it turns out the employee was pulling the wool over their eyes? What if they missed something? What if some circumstance in the person’s life causes them to be ineffectual and let customers or clients down?

These managers feel like, if they can blame the personality test, at least they’re off the hook. But the fact is, nobody knows what’s going to happen with someone down the road. Life is complicated. Change happens. We don’t have a ton of control over many things. Managers should know they are bound to make some mistakes. Some employees won’t work out. That’s the way it goes. That doesn’t mean they’re a bad manager or incompetent. The more people you hire and the more you choose to learn and iterate from the process, the better you’ll get at it.

But if you leave your decision up to just a diagnostic test created by someone who only meant the test to be a tool, not a replacement for managerial judgment, you’ll never get better. And you’ll probably make lousy decisions. So don’t underthink it. Don’t overthink it. And don’t lean too hard on personality tests.