Culture Tip 3: Cultivate the Value of Trust in the Workplace

We all know what it’s like to be in a group of people you don’t trust. You spend a lot of time 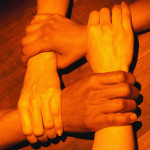 Either a metaphor for mutual trust or four people who caught each other’s hands in the cookie jar. You decide.

watching your words, making sure you don’t reveal anything vulnerable, measuring what can be used against you or twisted into something else. If you’re in an organization where there’s no trust in the workplace it’s usually characterized by cliques of people who “have each other’s backs” and will stage little psychological gang wars during meetings or while working on projects. In short, it’s really a terrible environment.

It’s so terrible, in fact, most really great employees won’t stay in it. Your A players, seeing that the company tolerates and even in some cases rewards behavior that’s more about duplicity and maneuvering than excellent work, will leave. They don’t want to be around that. High performers like to be around other high performers who are similarly passionate about doing a great job and creating something worthy. If the company allows untrustworthy people to keep their jobs, the A players are outta’ there.

One of my favorite quotes by Mark Twain is: “If you tell the truth, you don’t have to remember anything.” If you tell the truth and insist that your employees tell the truth, none of you have to worry about maintaining the web of lies, the house of straw that you have created. They’re not wasting valuable time crafting emails that put their actions in a certain light or that create enough ambiguity that if they’re caught they can claim ignorance. There’s a lot less time spent on CYA. And as every company should know, CYA consumes ridiculous amounts of time that should be devoted to more productive and revenue-producing activities.

Creating A Space for Trust

Fortunately, there are ways to foster trust in the workplace. But it has to come from the top down. If you’re a business owner, if you’re the executive director of the nonprofit, if you’re a manager, you have to make it clear that truth is absolutely expected. And then you have to make it safe to tell the truth. If somebody screwed up, it should be safe to own it right then and there so you can all set to work correcting the mistake, not hiding it and looking for scapegoats.

If you catch an employee in a lie, you should discipline them, coach them, give them help to deal with the problem, but ultimately the point has to be the people who can’t be trusted aren’t welcome in your organization. You want people who are mature enough to own their mistakes and deal forthrightly with problems as they arise. The weakest link in your chain can bring down your culture.

You can also look for red flags of dishonesty in the recruitment process, including:

• The candidate says he’ll start working right now, he doesn’t need to give two weeks’ notice.
• The candidate says “I can’t wait to come work for you, is there anything from my old company you want me to grab on the way out?”
• The candidate didn’t tell the truth about his previous employer or circumstances for leaving.
• The candidate believes the end justifies the means in closing a sale, which translates into lying to the customer.

If you trust your workmates, your bosses, your subordinates, you’re free to bring your best self to work without CYA or PYA (protecting). That’s going to lead to better performance, lower stress, higher profitability and generally a much happier world for everybody. BTW, we did all learn this in kindergarten.