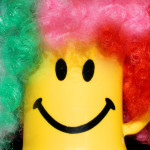 Norene decided to disguise her favorite office coffee mug in a rainbow wig so the new guy would stop using it.

much better things used to be before the city grew so much. How there used to be no traffic and there were all these other great eateries and Willy Nelson or Stevie Ray Vaughn or Janice Joplin would just pop by and play at your backyard barbecue. Stuff like that. That’s how a lot of employees of companies can be, too. The organization starts to grow and adds new employees, shifts offices, change policies and, while the executives might be thrilled with the growth and all the cool things the company can do, some of the employees really struggle to adapt to the changes. Yes, I know, I’ve written about this before. But this is, as promised last year, Culture Tip Number 2: Make Change Good.

Growing isn’t easy. If it was, no one would have coined the phrase growing pains. One minute you can have an impromptu meeting in the kitchen and solve a problem, the next you can’t even officially discuss the issue until the scheduled meeting with all of the employees, including the telecommuters Skyping in.

One minute your systems work this way, then the new director of operations, who you didn’t need when there were only 10 of you, has a whole new system everybody has to learn based on some kind of hifalutin’ best practices and the CEO thinks the person is just brilliant. What?

One minute, there really isn’t anything about the company you don’t know, from the state of the CFO’s romantic relationship to the reason you switched software vendors. Now, you only know what you need to know for your job—which, to be fair is really all you can handle at this point, but still.

What happened? We had such a nice little work family environment. I know, it’s hard. And it’s good for managers and executives to understand that it’s hard. But it’s even better to build a culture where everybody knows that change is coming, that growth signals something good and that the new guy using your favorite coffee cup is really not the most important thing happening today.

If you suspect your organization is going to grow—and that’s what we all hope for—it’s a good idea to talk about the fact that, when growth happens, people’s roles are going to change. And the desks might be moved. And the whole office might be moved. Processes that worked for a dozen employees won’t work for 25 and processes that worked for fifty won’t work for 100. There are these magic numbers companies hit that mean they’re really getting somewhere and that they need to reevaluate the way they’ve been doing things.

But while processes change and customers change and the way things are configured change, managers and executives can make sure that the company’s vision and focus are clear and that they guide the organization through all the changes. Make sure that both long term and new employees understand and can communicate that vision and focus and that some aspects of the company’s essence remain even if the products, services, logistics, employees and other things have to pivot. So basically, take the time to talk about change and make the case for Change is Good.

Let’s face it, we’re living in a world where a new idea can transform an industry overnight. Change really is the only constant. But as long as you know why you’re there and all of your employees can share a work ethic, a team ethic and a set of principles that include the willingness to cheerfully meet change when it comes, each change can just make you stronger.

And by the way, Willy Nelson hasn’t played at my backyard barbecue, yet.