When Zenefits started, it had a great mission. It wanted to disrupt the insurance industry, making it 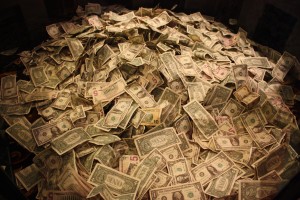 Financial success should be the fruit of running a great business.
Nick Ares Flickr Creative Commons

easier for people to sign up for benefits and for organizations to manage their employees’ benefit plans. Let’s face it, industries with a lot of regulations can create service nightmares. So Zenefits had the right idea. Then, at some point, their idea changed. Instead of focusing on disrupting the insurance industry and making it easier for people, they decided to focus on how much money they could make and how fast they could grow. Changing focus from the mission to the money can ruin your culture.

Don’t get me wrong, I’m all about succeeding in your business. And if you grow fast, fantastic! And if you make millions, even better. But if that’s the primary goal, you’re likely to make decisions that don’t benefit your customers or your employees. In the case of Zenefits, they were selling insurance illegally through sales people who weren’t licensed. Which makes you wonder: When did that decision get made? When was that pivot point where somebody said “Hey, let’s stuff the regulations. It will be easier and cheaper this way?” Clearly, that was a leadership decision. A bad one.

Ultimately, if the people at the top are saying: “Our mission is to provide a better service for our customers or constituents” that will drive one kind of culture. People will know that’s where the focus is, that’s what’s rewarded. And chances are, if you’re good at what you do and you stick to that mission, you’ll also make money and grow. But once the message from the top becomes: “We’re on the gravy train. Let’s all focus on making as much money as we can as fast as we can,” that says something very different to the people who work for you. If they’re focused on the dollars and not on the customers, they’re likely to make decisions that will bring in dollars in the short term and lose you customers in the long term. Your culture is molded by what the company is about. Who gets promoted, what behaviors are rewarded, who is on the “inside” and who is on the periphery are all affected by what your business is trying to accomplish. Aiming to build a great business versus just raking in cash affects all these things.

that the company would now focus on operating with integrity, serving the customers and making Zenefits a great place to work. “This is day one,” he told employees. “This is a founding moment. You are all co-founders in this new path forward.”

But he will have his work cut out for him, since 1,500 employees who have been used to operating without integrity takes a lot of undoing. I hope he makes it.